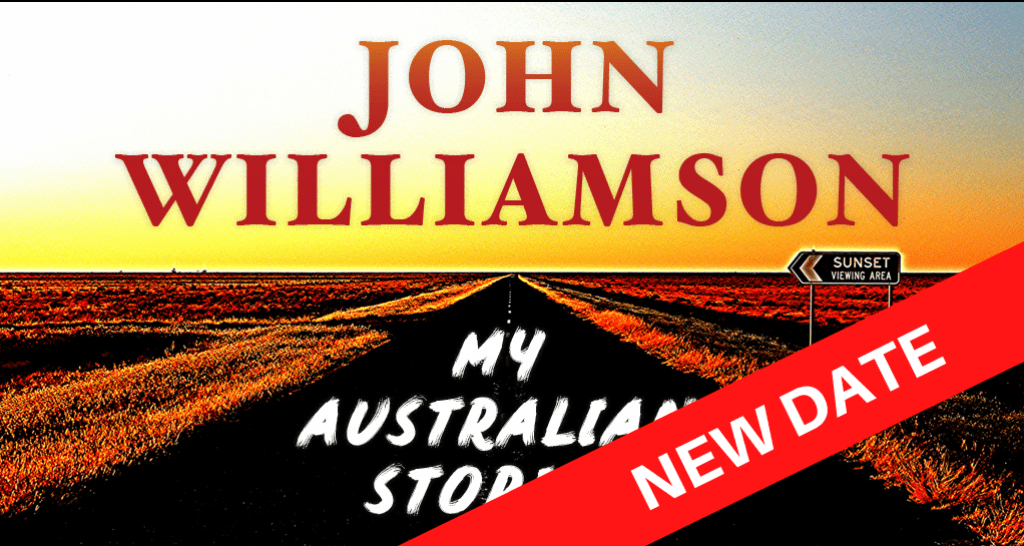 After fifty-one years of continuous touring, it’s tempting to hang up his hat and build that chook pen on his beloved property in SE QLD. But in January 2022, John Williamson will perform his My Australian Stories five-concert series, only in the capital cities of Sydney, Melbourne, Brisbane, Adelaide and Perth, taking his audiences on a special journey to places that have inspired his extraordinary career.

‘For over 50 years I have travelled and written songs that cover the width and breadth of this ancient land. I spent six years wheat and sheep farming in both Victoria and New South Wales, lived in Melbourne, Sydney and now the mountains in sub-tropical Queensland. All this has given me an understanding of what my country is about. That’s ‘My Australian Story’, says Williamson.

Like a tumbleweed across this vast continent, John Williamson has traversed the country from east to west and north to south. There are few places over this fifty-one-year career that he hasn’t visited or performed in. He’s pulled up to have a yarn with farmers, miners, station owners and everyday folk who have stories to share. He’s as familiar sitting around a stock camp under the Milky Way as he is sitting on his well-travelled stool on stage.

The eldest of five boys and a wheat farmer’s son, he had an idyllic childhood growing up in the Mallee country of North West Victoria. At nineteen the family moved to North West NSW and it was here that his love of birds and the bush flourished. Both are a constant source of inspiration in his songs. His first break as a songwriter came when he walked into Channel 9 studios in Melbourne, having written his first song, ‘Old Man Emu’ while driving the tractor. He walked out as the winner of the TV channel’s ‘New Faces’ talent show and a recording contract in hand. He took a punt on making a successful career in the music industry and left the land. ‘Old Man Emu’ went on to become a number one hit on the charts nationally for five weeks. Those early years of perseverance, honing his craft in the clubs and pubs of Victoria and NSW as a one-man band and a belief in wanting to sing about Australia, in his own voice, rather than imitating an American accent, has made him one of our most sought-after performers.

More than 500 songs later, spread over fifty-two albums (including twenty studio albums), twenty-seven Golden Guitars and countless accolades, he’s not one to rest on his laurels. John says he still feels he’s learning.

Williamson sees himself primarily as an entertainer, so his audiences should be prepared to laugh and cry as he takes them on a journey around his beloved Australia. From Outback Coober Pedy to Wonthaggi on the Victorian coast, from the Kimberley to Cape York, who knows where you might end up? His audiences can expect the biggest hits; the enduring ‘Old Man Emu’, favourites such as ‘Mallee Boy’, ‘Galleries of Pink Galahs’, ‘Cootamundra Wattle’, ‘Raining on the Rock’ and ‘Chandelier of Stars’ will all make their appearance. Of course, his iconic ‘True Blue’ is a certainty.  But expect some surprises. ‘Queen in the Sport of Kings’, his first song to win a Golden Guitar and one of a handful inspired by city living will make a long overdue comeback, as might ‘Coober Pedy’, ‘Back at the Isa’, ‘Prettiest Girl in the Kimberley’ and more.

One thing is certain, his passion for this country is second to none and Williamson will grab your heart, keep you entranced and entertained for nearly two-and-a half hours and you will walk away feeling proud of this country and proud to be an Australian, as he is.